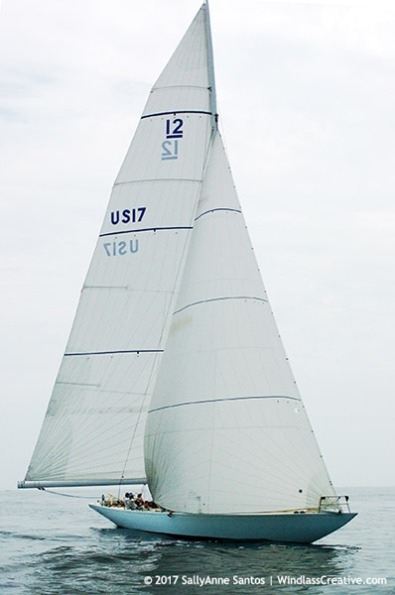 1986-2020
George Hill purchased Weatherly and sailed from Seattle to Florida via the Panama Canal. There, she fell from a crane on her bow and suffered severe damage to her stem planking, frames and rig. With a stay-sail and a storm trysail rigged from the mast stub to steady her, Hill brought Weatherly to Newport and gave her a complete restoration.

1966-1986
Weatherly was donated by Henry Mercer to the U.S. Merchant Marine Academy, Kings Point, NY to be used as a training vessel for cadets. She was trial horse to Columbia in 1967 and for Valiant in 1970. In the early 70’s she was again altered to race on the Great Lakes and won the Mackinac Race. In 1975 she was purchased by Lynn Summers and Alan Buchanan who kept her in Seattle, Washington. In 1981 they donated her to the Seattle Council of Boy Scouts of America.

1958-1965
Weatherly was one of three boats built for the 1958 America’s Cup Defense. She was solidly built with extensive use of laminated mahogany in the keel, stem and stern. At her best in light air, she was eliminated from the 1958 Trials. Four years later Rhodes and Luders collaborated in radical interventions: the stern was cut; weight reduced above deck, wetted surface reduced and approximately 1000 lbs were stripped from the structure and transferred to a redesigned ballast keel. In 1962, with the increase in boat speed and new skipper, Bus Mosbacher, she won the Defender Trails and the Americas Cup by a score of 4-1 vs. Gretel. She also won the Queens Cup (NYYC) and the Chandler Hovey Gold Bowl in 1959, 1960, 1961 and 1962 and the Astor Cup in 1961.