A Connection for Historic 12 Metres Around the Globe

NEWPORT, R.I. (August 29, 2019) – In the first-ever ROAD TO THE WORLDS Waypoints Series, it came down to the last day of the last regatta – the 2019 12 Metre World Championship held over July 8-13 in Newport, R.I. – to determine Courageous (US-26) as the overall Series winner. Introduced in 2017 to help build 12 Metre competition in the Northern Europe, Southern Europe and Americas fleets, the WAYPOINTS Series tallied scores posted by 40 12 Metres from nine countries in 28 regattas held in five countries over a period of three years. It awarded points for both participation and performance and the victor’s crown to the team that had accumulated the greatest number of points by the end of the World Championship. As for the secondary focus of the WAYPOINTS Series – to further the recognition of a global collection of heritage 12 Metres and the owners who are working to preserve their histories – it didn’t hurt that Courageous is perhaps the most famous 12 Metre in the universe.

Courageous, an Olin Stephens design launched in 1974, was the first all-aluminum hulled 12 Metre and the second 12 Metre to successfully defend the America’s Cup twice: in 1974, skippered by Ted Hood and, perhaps most famously, in 1977 when Ted Turner defeated Alan Bond’s Australia (KA-5) four races to zero in a best-of-seven series. 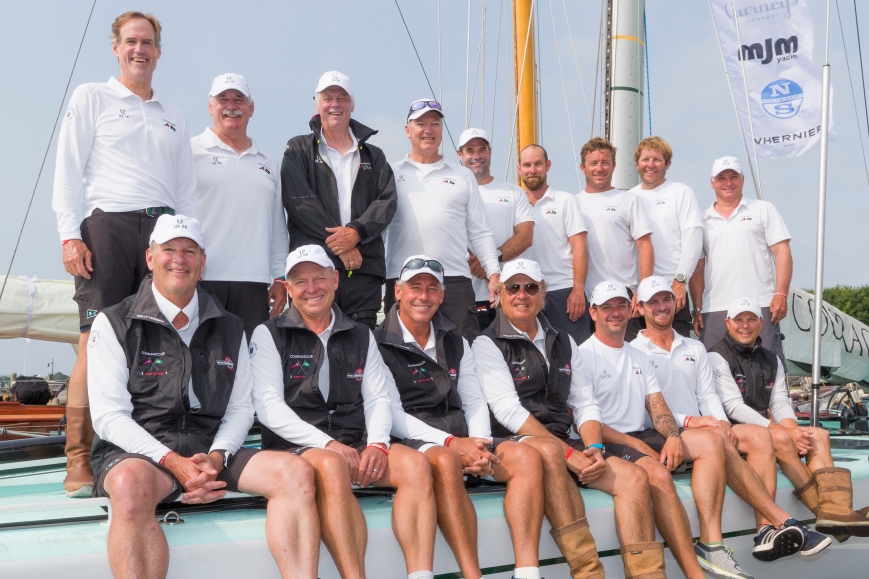 “We focused on the Waypoints Series by making sure we had a consistent crew, performing and doing well in as many regattas as possible,” said Courageous co-skipper Ralph Isham, who with fellow Newport co-skipper Alexander Auersperg and crew members Steve Glascock and Ward Marsh formed a syndicate 15 years ago to enter into a long-term lease of the yacht after it was donated to the Museum of Yachting. “It means a great deal to our crew that we performed consistently over many regattas in many conditions…light air, heavy air, varied wind…and with Challenge XII (KA-10) and Victory ’83 (K-22) always nipping at our heels.”

The Courageous syndicate members have been racing 12 Metres since 1999, when they initially gathered to sail Columbia (US-16), the first 12 Metre ever to win the Auld Mug, and prepare for the 2001 America’s Cup Jubilee in Cowes (the only gathering of 12 Metres larger than that at the 2019 12 Metre World Championship). “When we came back from Cowes, we rebuilt Courageous, and we’ve been sailing and working on her ever since,” said Isham, noting that a “total reset” overseen by Naval Architect David Pedrick in 2002/2003 put Courageous into “great shape and progressively made her faster and faster.” (Prior to the 2019 12 Metre World Championship, Naval Architect Jim Taylor collaborated with sailmaker and Courageous crew member Robbie Doyle to make further modifications to her hull, rudder and mast.)

“In the beginning, the boats in the Modern Division (for 12 Metres built between 1967 and 1983) were just us and two others – Intrepid (US-22) and Freedom (US-30) – but after Dennis Williams and Jack LeFort brought Victory ‘83 and Challenge XII to the game, it was very encouraging for other owners who wanted to step up,” said Isham. “We never imagined we’d have eight boats on the line in our Modern Division at the World Championship. It was amazing, a thing of beauty, so stunning to see.”

The crew, which also included America’s Cup veteran Arthur Santry at the helm, contributed immensely to the boat’s impressive performance at the Worlds. Courageous tied on point score for second place with Enterprise (US-27); however, on a tie breaker she had to settle for third. (Jack LeFort’s Challenge XII won and was crowned the World Champion in the Modern Division.)

“We were happy we did well in the Worlds,” said Isham. “Would we like to have won? Sure, but winning the ROAD TO THE WORLDS Waypoints Series was a real sign of achievement for our crew. The series definitely served its purpose of keeping us motivated and connected with 12 Metre fleets around the world.”

The Waypoints Series Perpetual Trophy, donated by 12 Metre Yacht Club Commodore James Gubelmann, depicts the famous schooner America in great detail (both above and below the waterline), as translated by Pairpoint Glass Company.

The next 12 Metre World Championship is scheduled for August 16-23, 2020 in Helsinki, Finland.