NEWPORT, R.I. (July 24, 2017) – The waters off Newport, R.I., were alive with 12 Metres when the Newport Trophy Regatta took place over July 21-23. The event, hosted by Ida Lewis Yacht Club, reflected the excitement growing for the 12 Metre World Championship set to take place here in 2019 as part of the New York Yacht Club’s 175th Anniversary Regatta. The historic fleet numbered ten boats, all collecting points in the global ROAD TO THE WORLDS Waypoint Series.  The closely matched New Zealand (KZ-3) and Laura (KZ-5) sparred in the Grand Prix division, while the uber competitive Freedom (US-30), Defender (US-33), Challenge XII (KA-10), Intrepid (US-22) and Courageous (US-26) took off the gloves in Modern Division and the beautifully spirited Columbia (US-16), Weatherly (US-17) and American Eagle (US-21) battled it out in Traditional Division. 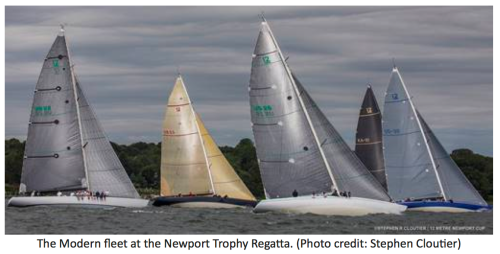 The Grand Prix Division completed two races on Friday, while the other divisions completed only one in light breezes that just wouldn’t hold for a full day of racing planned “up the Bay.”  Saturday was worse when sailors floated for six hours “outside” on Rhode Island Sound waiting for wind that never came. Sunday, however, made it all worthwhile when four races were completed in upper Narragansett Bay, this time in a northeasterly that began with wind speeds in the mid-teens and then diminished to 7-8 knots as it clocked right.

“I think we went through our entire sail inventory, putting up the light #1, the heavy #1, the #3, a couple of different spinnakers…it was fun!,” said Gunther Buerman, the owner/driver aboard New Zealand. Although New Zealand beat Laura in all six of its races, Buerman said it wasn’t easy. “Sometimes it’s better to be lucky than smart, and we got lucky a couple of times. KZ-5 was every bit as fast as us today, and sailed really well.”

In the Modern fleet, Challenge XII held commanding leads in all but the last of its five races, when Courageous won. Accumulating six points for its final standing, Challenge XII finished eight points ahead of Courageous, which was tied on point score with Defender. Challenge XII, along with Freedom and Defender, are newly revived 12 Metres, their owners inspired by the promise of intense competition in 2019 when 12 Metres from across the globe are expected to come to Newport for the Worlds.

Challenge XII’s owner/driver Jack LeFort attributed the boat’s performance to crew work and great sails, among other things. “We’ve done some nice work modifying the boat, getting it ready, but we think there’s more room for improvement. By the time the Worlds come around, there are going to be more teams stepping it up, so we need to make sure we continue to move our game up as well.”  Historically, Challenge XII was a contender in the 1983 America’s Cup series. “It’s Ben Lexcen’s last boat,” said LeFort. “He’s probably smiling somewhere right now. It’s got great bones, it’s fast off the breeze. People thought it was a light-air boat. We don’t think that; we just think it’s a really good boat.”

Waypoint Series standings have been tallied based on previous events held in Newport (the Metrefest Newport Regatta held in June), Germany and Denmark.